What Does it Really Mean to Plead the 5th? 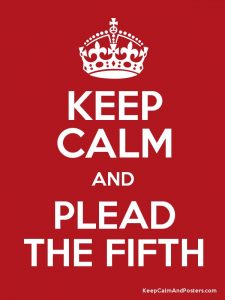 The phrase “pleading the 5th” often comes up in reference to courtroom dramas. What does it actually mean? Should you plead the 5th, and if so why?

What is the Fifth Amendment?

When Can You Plead the 5th?

You can’t just randomly plead the 5th. There are certain conditions which have to be met. Specifically.

Your refusal to answer questions can’t be used against you in a criminal case, and can’t be used to imply guilt. You can even get out of being called as a witness by telling the prosecutor you are going to invoke the fifth. You can also plead the 5th as a witness if your answer might implicate you in a crime, even if it’s not related to the crime at hand. A prosecutor might give you immunity to get around this.

Is there a Downside to Pleading the 5th?

There can be. A few things to consider:

In other words, whether it’s a good idea to plead the 5th depends very much on your circumstances. You also need to know when you can plead the 5th. If you are in a situation where you need to defend yourself against criminal allegations, you should first get a good attorney who can help you make these decisions for your specific case.