National Elections in the United States of America 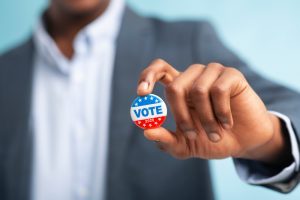 General elections in the United States of America fall on the first or second Tuesday of November. The general elections are, by statute, set to occur on “the Tuesday next after the first Monday in the month of November.”1 The date can fall anywhere between November 2 and November 8. While there are general elections every November, it is the mid-term elections and especially the presidential elections that get the most attention. Americans can vote for local offices every year, but only during the mid-term and presidential elections can they vote for national representation. Americans can cast ballots in these elections for their senators and representatives in the legislative branch and for the presidency in the executive branch.

US SENATE: THE UPPER HOUSE

Every state, regardless of size or population, has two senators. Every eligible voter in a particular state can cast a ballot for the same two senators. Every Texan, from Austin to Dallas to Houston to San Antonio to Corpus Christi, votes in the same senate race. A senator’s term lasts six years, so sometimes a state will not have a senator up for re-election during any given year. Occasionally both will be up due to special elections. Since every state has two senators, the United States Senate has a total of 100 members. Neither Washington DC nor any of the United States territories (Puerto Rico, Guam, etc.) are represented in the Senate.

HOUSE OF REPRESENTATIVES: THE LOWER HOUSE

Whereas senators serve a six-year term, representatives are only in office for two years. The entire House of Representatives is up for re-election every other year during the mid-term elections. Because of this, the makeup of the House can change very quickly when compared to the Senate. Several cycles may be required for the dominant party of the Senate to change since only about 33 seats are up during an election year, but change can happen swiftly with the House because all 435 seats are up.

While neither Washington DC nor any of the overseas territories have a senator, there are six non-voting members of the House of Representatives. Washington DC, Puerto Rico, American Samoa, Guam, the Northern Mariana Islands, and the US Virgin Islands all have one elected representative in the House, although they are not granted a vote.

Each state is divided up into districts from which a representative is chosen each Election Day in even-numbered years (i.e. 2016, 2018, 2020). Districts within each state are often redrawn after the ten-year census is conducted. Population increases and decreases are taken into account, and the number of districts can be reallocated. The total representatives in the House must stay at a constant 435, so some states may acquire new districts while others will have to combine districts. After the 2010 census, states could use the numbers to adjust their districts in time for the 2012 presidential election.

For the executive branch of government, the office of the president is up for election every four years. Presidents are limited to being elected to office only twice. They may even be limited to only one election if they previously served more than two years as president. For example, if the vice president were to take over less than two years into a new presidency, then they would only be able to run for re-election once. They were elected as vice-president, but they served the majority of that term as president. If they served less than two years, then they would be able to run for election twice. President Lyndon B. Johnson could have run for a second term in 1968 because he had only served the last 14 months of President Kennedy’s term. This was ten months less than the requirement that would have otherwise disqualified him from seeking a second elected term. However, President Johnson chose not to run in 1968. While serving only two terms had been the norm ever since George Washington, it took a constitutional amendment to legally implement presidential term limits. The 22nd amendment was ratified in 1951, so it did not apply to President Franklin D. Roosevelt. He was elected four times to the office in 1932, 1936, 1940, and 1944.

During presidential elections, citizens do not actually cast their ballots directly for the offices of president and vice president. They rather vote for their state’s electors. Electors are people chosen by each party to vote for their candidate in mid-December following a presidential election. American presidential elections are not a national race but rather fifty state-wide races along with Washington DC. If the Democratic candidate wins the popular vote in a certain state, then the electors chosen by the Democratic Party of that state will cast their ballots in mid-December. The same rules would apply if the Republican candidate were to win that state.

Most states are colloquially referred to as “red” or “blue.” A red state has little or no chance of voting Democratic; they are considered Republican-held states. A blue state has little or no chance of choosing a Republican; they are considered safe Democratic states. California, New York, and Massachusetts are examples of blue states. Oklahoma, Mississippi, and Idaho are examples of red states. In between are the “purple states” or “swing states”. These states are a mix of blue and red (purple), or they can swing either way on the political spectrum. Most of these swing states have sizeable numbers of electors, such as Florida (29), Pennsylvania (20), and Ohio (18). This is why presidential campaigns normally focus on just a few states during each election cycle. The solidly red or blue states are either deemed safe for their dominant parties or not worth wasting resources on for the opposite party. Arizona (11), Ohio, Florida, Pennsylvania, Michigan (16), Wisconsin (10), and Colorado (9) are all considered swing states. Most have higher numbers of electoral votes, so candidates tend to focus their time campaigning there. New Hampshire (4) is also considered a swing state, but it does not have a high number of electoral votes.

There are a total of 580 electoral votes in the Electoral College. This number comes from the 435 representatives in the House, 100 senators in the Senate, and the three votes for the nation’s capital. 270 votes are needed to win the Electoral College and become president. When the Democratic candidate wins California, California sends its Democratic electors to the state capitol in Sacramento in mid-December to vote for that party’s candidate. Some states allow their electors to rebel and vote for someone else, but that is rare. Electors who refuse to vote for their designated winning candidate are called “faithless electors”. Likewise when the Republican candidate wins Mississippi, Mississippi sends its Republican electors to the state capitol in Jackson to vote for that party’s candidate. Two states, Nebraska and Maine, allow their electoral votes to be given out proportionally. Some of their electoral votes may go toward both candidates depending on how evenly split their popular vote was. In 2016, President Donald Trump won all of Nebraska’s electoral votes outright, but Maine split theirs. Three went to Secretary of State Hillary Clinton and one went to Donald Trump. In 2012, President Barack Obama won all of Maine’s electoral votes, and Senator Mitt Romney (who was then the former governor of Massachusetts) won all of Nebraska’s. In 2008, Obama won all of Maine’s electoral votes, and Nebraska split theirs between then Senator Obama and Senator John McCain. McCain took four of Nebraska’s votes, and Obama was allotted one.

Because of the Electoral College, it is possible for a candidate to win the popular vote but lose the presidency. This has happened five times in American history. The first three times occurred in the 19th century during the elections of 1824, 1876, and 1888. This has also happened twice in modern American history with the elections of 2000 and 2016. Vice President Al Gore received about 500,000 more votes nationally than President George W. Bush (who was then the Governor of Texas), but he was critically short by only about 500 votes in the state of Florida. Similarly, Hillary Clinton received 2.9 million more votes nationally than Donald Trump, but she lost crucial states in the Midwest and Rust Belt.

This complex process is how American electoral politics are currently organized at the national level. Every two years, Americans can vote for one-third of the Senate and the entire House of Representatives. But every four years, they can also vote for the presidency. These three offices – senator, representative, and president – are the only national representation more than 300 million Americans have, and every fourth November presents the opportunity to effect massive change in the direction of their government.