DUI/DWI Field Sobriety Tests: Whether to Say Yes or No.

Do You Really Want to Take Field Sobriety Tests? 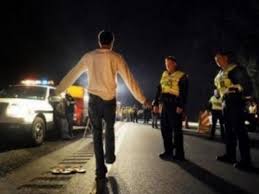 When a police officer makes a traffic stop, one of the first things that he or she will do is make a quick assessment on whether the driver who is being detained might be under the influence of alcohol or drugs.  That assessment usually consists of checking to see if the driver’s eyes are red, bloodshot or glassy, whether his or her speech is slurred and whether there is an odor of an alcoholic beverage coming from the driver’s breath.  If any of those indicators of possible impairment are present, the officer will then ask the driver to step out of the vehicle.  Another assessment will then be made on how well the driver accomplishes that task.  Then the police officer will ask the driver to perform a series of roadside field sobriety tests

Three standard field sobriety tests are used by law enforcement for purposes of assessing whether a driver might be impaired by alcohol or drugs.  They were approved by the National Highway Transportation Safety Administration more than 30 years ago.  They consist of the following:

When a driver performs these tests, the investigating police officer is given the opportunity to make other assessments for purposes of establishing probable cause to take the driver into custody for breath or blood testing.  Unlike breath or blood testing, drivers have every right to refuse field sobriety tests without any legal consequences.  In all likelihood, the investigating police officer has already made his or her mind up to take the driver into custody anyway.   The officer is only trying to obtain additional evidence to convict the driver of DUI with.

Why Help the Prosecution’s Case?

What comes to issue is that somebody who has never had a drink or used illegal drugs in their life is likely to fail one or more field sobriety tests.  Misunderstanding what a police officer says or asking for clarification can be deemed a failure.  Inability to satisfactorily perform any of the roadside tests due to medical reasons might also be deemed to be a failure.  Since the driver’s performance of the tests is almost always recorded with a dash or body cam, anybody who has been consuming alcohol or drugs who fails any of the tests is likely to be giving a prosecutor more evidence to support a conviction.

How is passing or failing a field sobriety test determined?  Unlike certified breath or blood testing, there’s nothing that resembles a reasonable degree of scientific certainty in assessing a driver.  Whether a driver passed or failed any field sobriety tests is up to the investigator’s sole subjective discretion and judgment.  If indeed you’ve consumed alcohol or drugs before being stopped by police, refusing to perform any field sobriety tests can be pivotal when a judge or jury determines your guilt or innocence.  They’ll have less evidence against you.